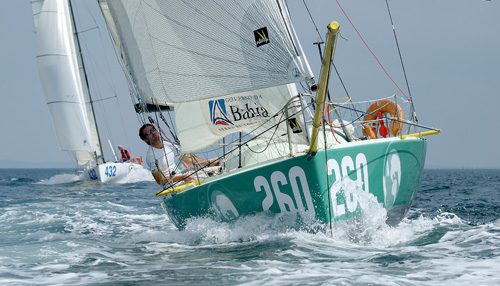 From  31 May, the  Mini 6.50, these mini offshore sailing boats with a reduced crew, will assemble in  Douarnenez for two big races of 2019 : the Marie-Agnès PéronTrophy, a challenge of the  « French Championships of Solo Offshore Racing – Mini 6.50 » and the Mini-Fastnet.

For the Marie-Agnès Péron Trophy, the skippers will take part in a solo race of 220 miles between  Douarnenez, the Iroise sea, the south of Brittany and return to Douarnenez. Departure on 06 June and prize-giving on 8 June  2019.

For the Mini-Fastnet, it’s a week later, after the Prologue on Saturday  15 June, that the sailors will cast off  anew from the Finisterian port on Sunday 16 June for a return trip in doubles towards the mythic  Fastnet lighthouse in Ireland.

Before the start, on the pontoons of Treboul, its pure excitement. Even if the preparations take up time, it’s all done in a great atmosphere specific to the Minis and the skippers remain approachable ; visitors are welcome.

Foreigners are faithful to the  Mini circuit. Outside France, not less than 13 nationalities have lined up at the start of the  MAP Trophy and the Mini-Fastnet in the last two years: Germany, Australia, Belgium, Brazil, Croatia, Spain, Great Britain, Ireland, Italy, Czech Republic, Switzerland, Turkey, USA.

During the races, we can follow the fleet’s progress on the maps.

Every year, in June, Douarnenez will be the unmissable destination of the Mini 6.50 Class.  For 3 weeks, more than a hundred skippers will tread the pontoons of Treboul. A year of recovery

After a 2020 season rocked by the health crisis this new season is looking intense. We’ve noticed a huge desire to sail from the skippers and we’re already at 150% of registrations for the Atlantic races. Everybody is waiting for the decision of those higher up which could kick off the 2021 season from April. We can therefore hope to follow the “almost normal” competition calendar which concludes with the Mini-Transat. Each race counts even more – after a year severely disrupted by storm Covid – towards acquiring miles and experience to qualify for the Mini Transat. So see you in June for the high points which are the Mini races in Douarnenez!