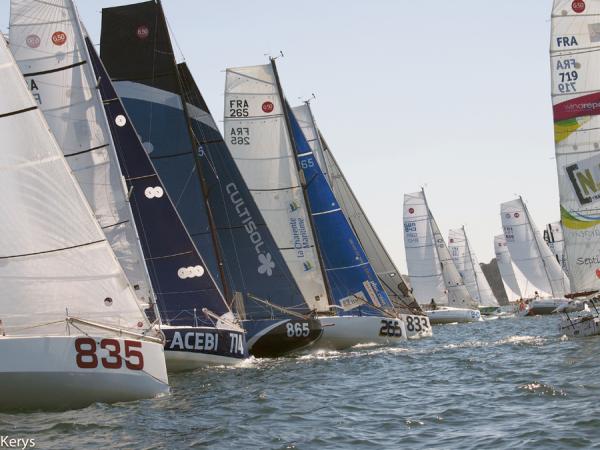 Today, the Mini class unites about  300 members, mainly racers, from all professional horizons, from the carpenter to the engineer, from the sailing instructor to the banker, from the journalist to the professional skipper. It is above all an association of enthusiasts, for lovers of these fabulous little sailing boats, who want to share the crashing waves, the budget nightmares, the caprices of the weather and all the moments of happiness that the sea offers !

The  ” Minists ” skim the Atlantic as much as the Mediterranean, thanks to the race organisers who, setting the bar high, have interwoven nautical and friendly links of the highest quality between the racers and the association.

The Board of Directors contributes to the dynamism of the Class as much in France as abroad. Each year, the race programme is enriched to form a coherent calendar, to mix things up a bit and attract new racers. Laboratory of offshore racing for more than  25 years, the Minihave two categories: « PROTO » and « SERIE ». It measures 6 metres 50.

The category PROTO is a real innovation ground for offshore racing.

The goal is security

One of the main ideas of the Class is to make the Mini’s evolve in the direction of security, whilst retaining their sporty and innovative appeal. This idea, marked by longlived memories of the perils of the sea, has ended up by creating a boat/racer partnership which is among the safest of the circuit. Responsibility, design, materials, checks, sea sense : on a Mini, everything is Maxi.