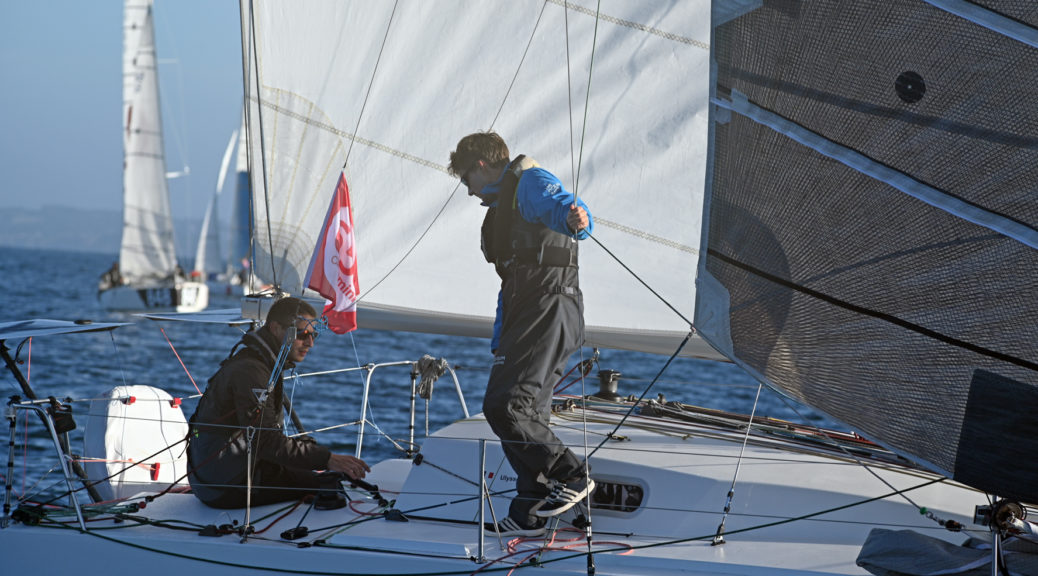 Still in light winds, the skippers must be thinking that Aeolus  is playing with their nerves… They all went around the waypoint that replaces the Fastnet lighthouse, about 50 NM south-east of it, during the day on Wednesday 15th June and headed for Douarnenez Bay. Same configuration as yesterday: a nice group of Prototypes in the lead and a fairly compact fleet not far behind. Indeed there is 18 NM between the first and the last sailor in the race… anything can still happen on the remaining 200 NM!  The new recently launched Minis are leading the group: the 1067 Bill, followed by the 1048 DMG Mori Sailing Academy 1 and the 1050 Léa Nature. These are good boats in light winds  it seems! A few NM further north, the leader of the series is the 903 Cancer@work skippered by  Anne Liardet in her 60’s and Lucas Valenz-Troubat, followed closely by the 963 DynaMIPS skippered by the well-known  Julie Simon, who has already made two podiums this year, and Hugo Picard. The 1065 Irvin moved up to 8th position, while Marco Varray, the youngest of the race at 16 years of age, accompanied by David Genest, owner of the 511 Bingo, moved up the fleet to 7th position after having been 40th in the afternoon.